My Foreign Coworkers are not Cheap Labor

From my first day at Microsoft, back when I was an intern.

Disclaimer: I wrote this post out of my own volition, and my words are based on my personal views, and not on my employer's official policy.

To be clear, this isn’t a post about Donald Trump. This is about facts – because it isn’t right to fuel hatred with falsifications.

This week, Microsoft pushed for exceptions to Donald Trump’s executive order on immigration, to help employees who were separated from their families. But this post isn’t really about the executive order. It’s about how Americans views foreigners. People are entitled to their opinions, but opinions should be grounded by facts.

The topic trended on Facebook and immediately attracted anger, supposedly because Microsoft wants immigrants for cheap labor. That couldn’t be further from the truth. 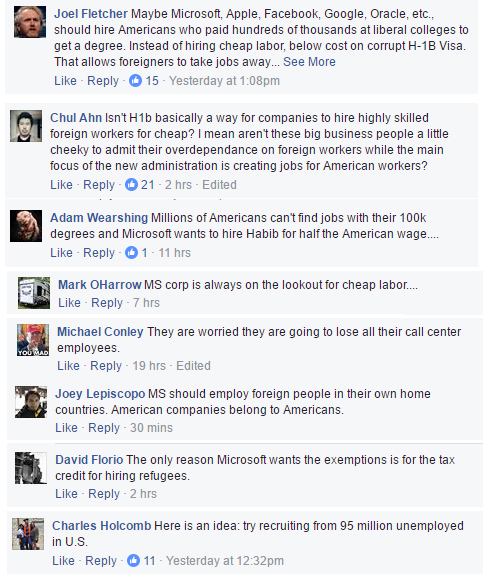 Most of my coworkers are American.

“Here is an idea: try recruiting from the 95 million unemployed in the US” – Charles Holcomb

I work at Microsoft’s main campus in Redmond. From firsthand experience, I can say that most of my co-workers are American-born. In fact, most of them are white.

I’m not saying that’s a good thing or a bad thing – that’s simply an objective fact.

A significant number of my coworkers were college hires from American universities (myself included). Microsoft is absolutely hiring Americans.

As a software engineer for Microsoft, I make a pretty good living – not just for a 21-year-old college grad, but for an American adult, period.

Yet, many of my “job-stealing, cheap-labor, immigrant” colleagues make more money than I do.  And they deserve it, because they’re some of the most skilled developers in the world. Many of them are in senior engineering positions, because they earned it. They are the furthest thing from cheap labor.

“Maybe Microsoft, Apple, Facebook, Google, Oracle, etc. should hire Americans who paid hundreds of thousands at liberal colleges to get a degree. Instead of hiring cheap labor … That allows foreigners to take jobs away” - Joel Fletcher

I don’t just work with Americans. I work with engineers who come from all around the world – India, Canada, China, and Australia, to name a few. These people aren’t mediocre engineers who work for scraps. American companies needed their talents, in order to thrive.

The H1B Visa helps bring the best of the best.

By the way, the H1B Visa doesn’t affect call center employees. We’re not asking to take people from other countries and make them sit in a call center halfway around the world. Rather, the H1B Visa affects specialty-occupation workers who are employed in the US.

I’ve learned a lot from my foreign coworkers. They’re knowledgeable and talented people who build complex projects. They are engineers who are incredibly accomplished and whose work is used around the world, but they will still take time out of their day to teach a new engineer some valuable skills.

Here are the facts: Microsoft is hiring both Americans and foreigners. Some engineers came to America because we needed their skills.

I owe a lot to my foreign coworkers.  I’m a better software engineer as a result of working with them, and they’ve earned the right to be here.